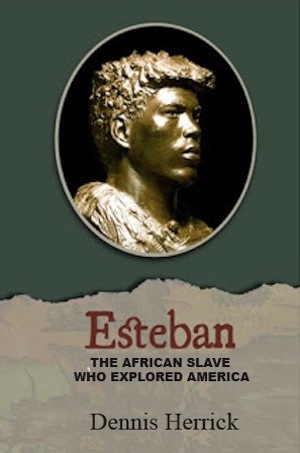 Although Esteban was his Spanish name, which translates to Stephen in English, this intriguing early historical figure has been even better known by several other names.

Many of the names commonly used for him are derived from his slave nickkname, which was meant to demean and marginalize him by referring to him as if he were a child. These nicknames take on a racially tinged tone when they are adopted and used in history books since the 1700s by American writers. They include Estebanico, Estevanico, Estebanillo, and other variations, all of which can be loosely translated as "Little Stephen" or even "Stevie" in English.

Arab writers from his presumed homeland in North Africa's Morocco usually begin by referring to him as Mostapha, Mustafa or some related variant. The Arabic full name in English comes out as Mustafa El-Azemmour, thereby including tbe name of the Moroccan city of Azemmour where he was first taken into slavery. Esteban's original birth name is not known.

Most historians believe that Esteban's arrival at Hawikku Pueblo in 1539 was remembered through the creation of a ka'stina spirit-being representing him called Chákwaina, an Anglicized spelling common today from the phonetic spelling of the Zuni or Hopi word of Tsa'kwaina. Men still wear the regalia and head cover of the Chákwaina ka'stina in pueblo ceremonies closed to the public. Non-Indians are most familiar with ka'stinas through small ancient and modern wood carvings mostly by Hopis and improperly referred to as "dolls." Chákwaina is often shown with a crescent moon and star painted on the head cover to symbollize Esteban's Muslim beritage. Cháikwaina is usually depicted as an ogre ka'stina because Esteban's arrival foreshadowed the ruinous domination of conquistadors and colonists.

A modern carving of Chákwaina, which is not authentic because it was carved by a non-Puebloan, can be seen at this LINK.